Oceania Yacht Agency offers a comprehensive yacht support service covering the South Pacific from it’s base in Port Whangarei, New Zealand. The agency is pleased to welcome Virginia Craig who has recently joined the team and brings with her a wealth of experience for the benefit of its yacht clients. By way of introduction a brief bio follows: 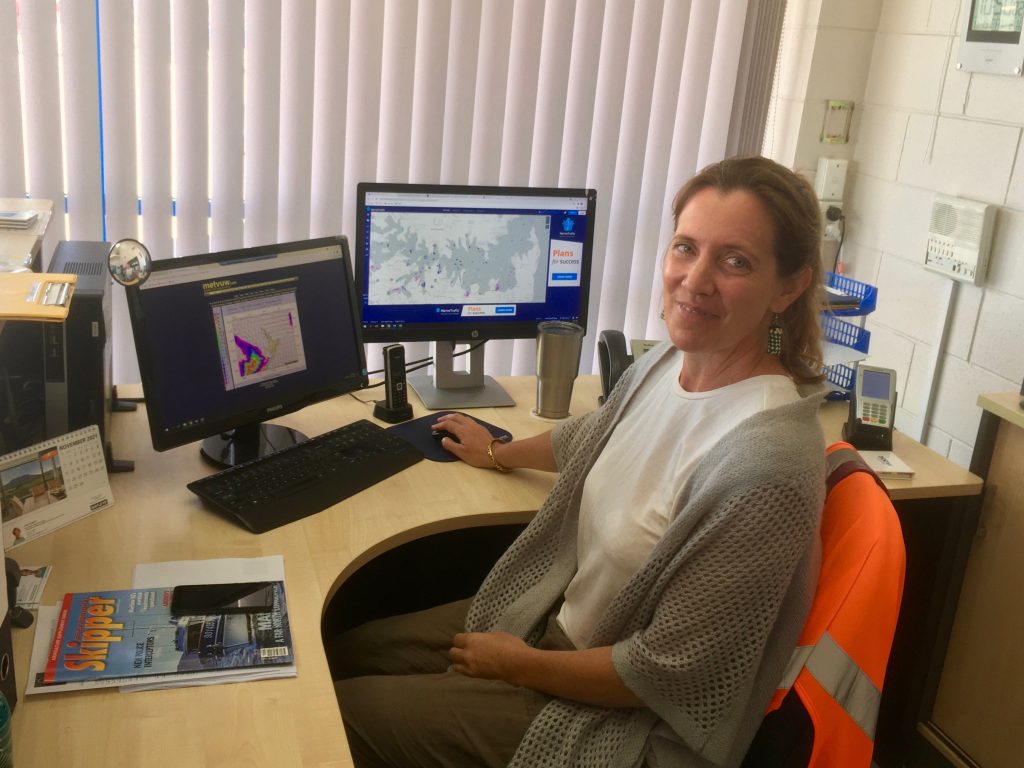 Virginia Craig – Busy in her office at Oceania Yacht Agency

Virginia has worked in various marine based roles, some of which include chandlery services, yacht repairs, yacht agent, first mate, deckhand, head stewardess, chef, superyacht guide, crew recruitment and training, delivery crew on various privately owned superyachts (both sail and motor). These activities lead her across the Indian Ocean many times, throughout the South West Pacific, Europe/Mediterranean and of course within New Zealand waters.

In 2003, NZ’s marine playground became too small and she left Northland to sail the Southwest Pacific in a 34ft yacht. She explored Fiji, sailed extensively through Vanuatu, Solomon’s, PNG and then sailed down to Australia. She later returned to Vanuatu in 2005 and settled into Vanuatu life, exploring all that this amazing archipelago had to offer. To improve her Bislama (Vanuatu Pidgeon English) she signed up for a few maritime courses at the college in Espiritu Santo, including her STCW and Stage 1 Captain ticket.

She worked with the New Zealand based charter vessel, Island Passage, helping with admin, crew placement/training, itinerary planning and also on-board as head stewardess/guide during their many years in New Zealand and Vanuatu.

Fate led her to meet up with Jess and Sam Bell as they were forming Kaleva Yachting Services, she joined forces and worked with them for many years in their thriving business. They worked extremely hard to get the Yachting industry in Vanuatu to where it is today. KYS attracted the majority of the visiting super-yachts. Unfortunately KYS closed their doors and a year later with the encouragement of Jess and Sam and many others in the industry, Virginia made the decision to form Port of Call – Vanuatu which quickly became a successful yacht agency specialising in authentic Vanuatu experiences.

With the changing times, Vanuatu borders were closed in March 2020. Soon after which TC Harold a Cat 5 cyclone struck Vanuatu’s central islands. As the only yacht agent physically on the ground in Vanuatu at the time Virginia, her team were asked to represent SEAMERCY, Yacht Aid Global and many superyachts, yacht rallies and private vessels. They worked hard to gain permission from Vanuatu Govt and NDMO to import the donated goods and equipment, they also travelled to the outer islands to distribute and demonstrate the donations (mostly clean water filters) to areas that were extremely isolated and were not on the major NGO’s radars.

But, it was now time for a change and the opportunity arose to join the team to create the new Yacht Services division of Oceania Marine. Despite Vanuatu’s ‘covid-free’ status it was not an easy task to get back to NZ with the massive queues of people trying to get a spot in MIQ. It took almost four months to finally ‘win’ a pass through the lobby system. The two weeks rest at MIQ was much needed after the busy lead up to my departure and the shock of arriving at a much changed Auckland airport with a welcome from Military and the Police. The room at The Sebel Manukau was comfortable and the meals were frequent and delicious. The multiple covid tests were also not too bad; maybe the nurses had more experience in doing them? Of course, murphy’s law; just after being released they announced that NZ citizens in Vanuatu will no longer need to go through the MIQ system.

It was always Virginia’s intention to come back to Northland, especially Whangarei and she is happy to be back in NZ’s winterless north…

“When I was first introduced to Oceania Marine and Port Whangarei a few years ago I was extremely impressed by the facilities and all that was on offer here. I did think at the time that it would make a lot of sense to have a yacht agency as part of the extensive list of services offered. It completes the business and wraps it all together. Customer services and satisfaction is top priority in this tight-knit industry and I look forward to working alongside all captains, owners and crew to help them create exciting and seamless itineraries. I aim to give people access to the best and most authentic experience that Northland, NZ and the South Pacific has to offer which will leave them with lifelong memories and the desire to return”